I was in no rush to do anything in the morning. Luckily, the hotel I stayed at had a supermarket in walking distance. After stocking up for the next few days, I departed around 11am and began to drive towards Redwood NP. Driving through such immense forests was beautiful. When I turned around one bend, I saw the tourist trap of a Bigfoot Store. As I child, I loved Harry and the Hendersons. Honestly, I’m usually a skeptic when it comes to things like Bigfoot. However, I’m sure that within the immense vastness of wilderness, there are plenty of places no human has ever set foot.

As I left later in the day, I arrived to Redwood National Park(s) later than I had intended. After watching a short film on the redwood trees, I started heading to the car. Fortunately, I got distracted by a ranger standing near bushes. When I approached, he asked if I wanted a blackberry. My favorite berry! He told me that park rules state that each person may gather one quart of berries each day. Challenge accepted. Those fifteen minutes were quite enjoyable, expect for the thorns on the bush. 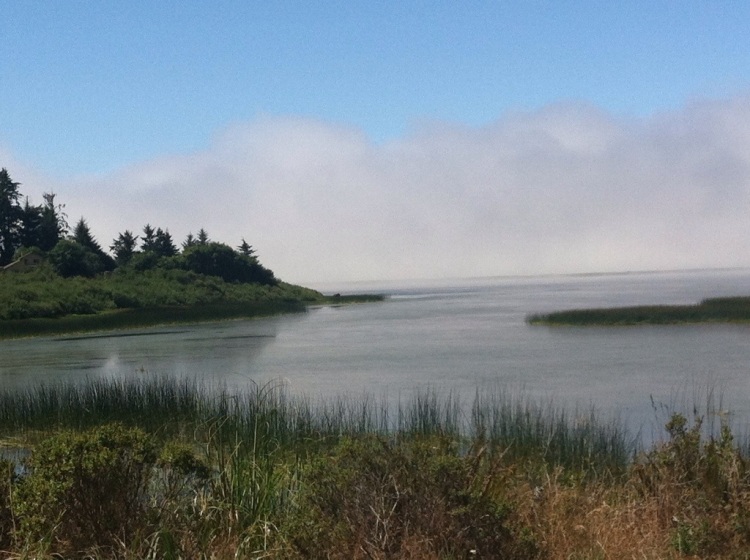 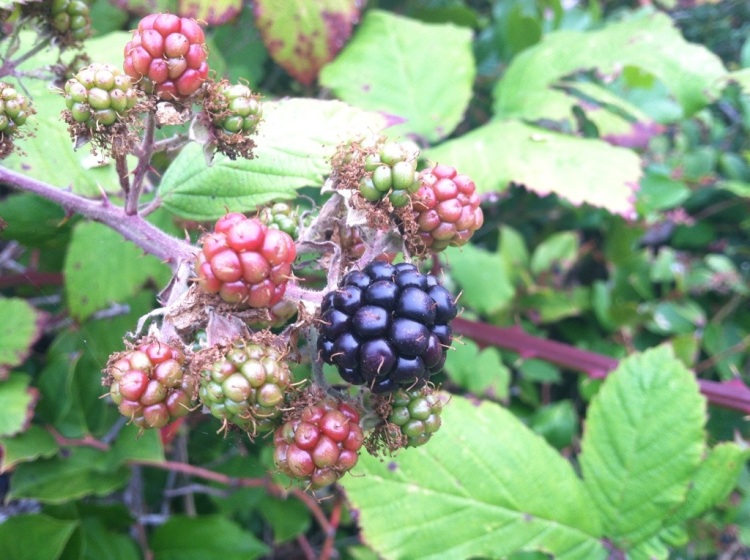 The “hike” I decided to take was a leisurely stroll through a redwood grove. The Lady Bird Johnson Grove contains some of the tallest and largest trees in the park. I found myself saying wow over and over again. It’s amazing to think that people protested (and even continue to do so today) the protection of such forests throughout the Pacific Northwest. 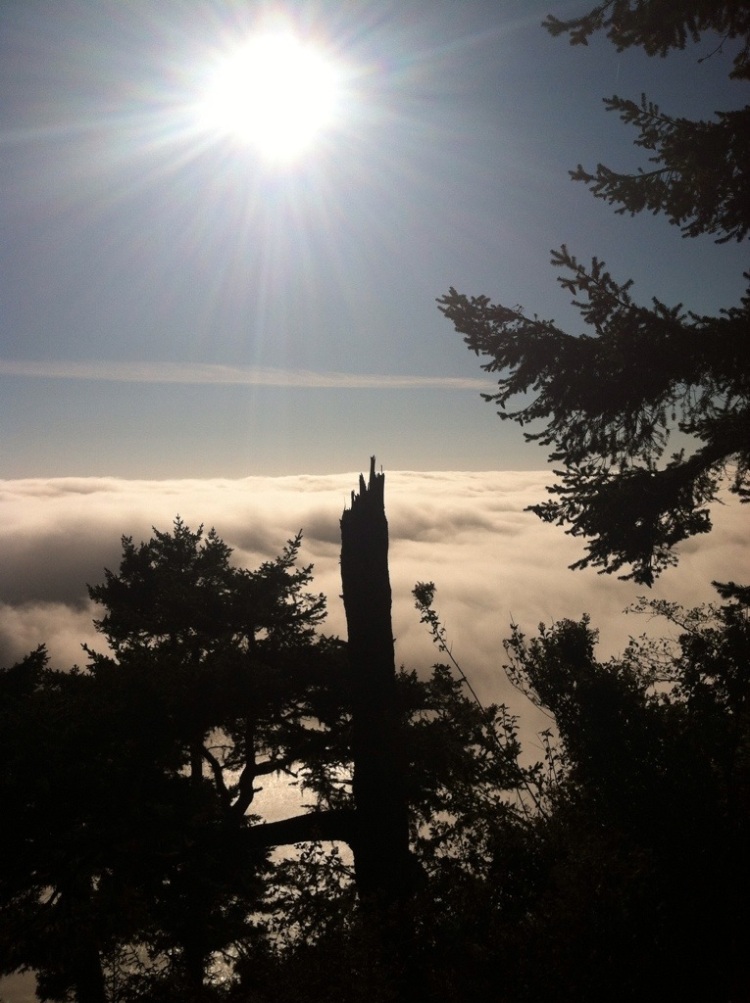 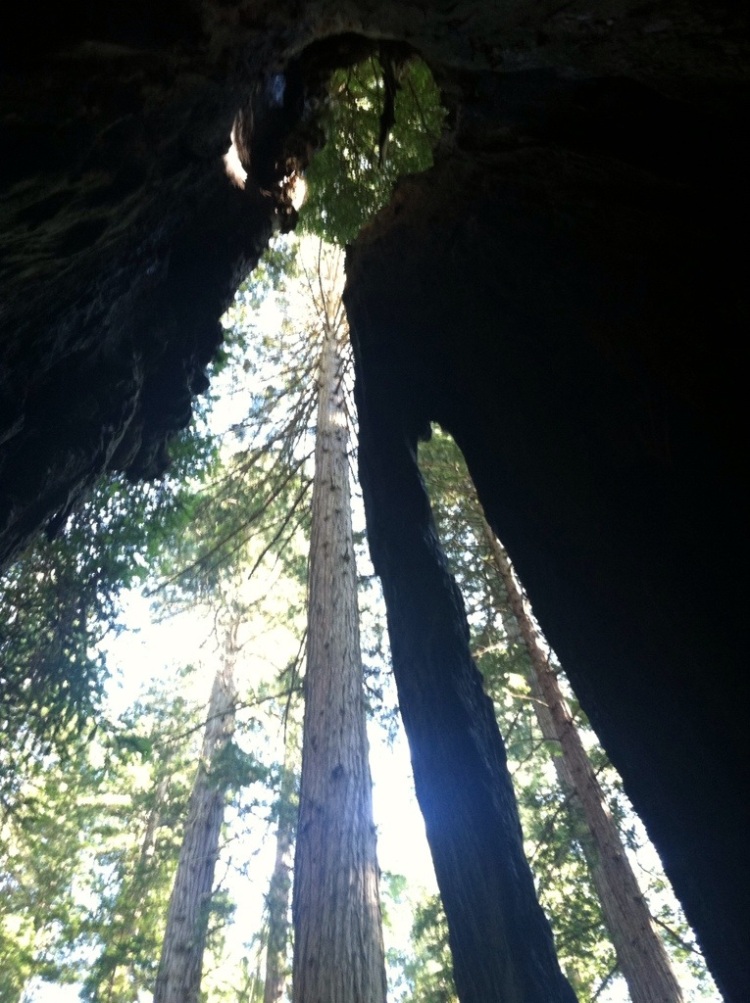 When I went shopping for food, I was inspired by my recent visit to Napa and the conversation I had with John and Lucy. After setting up camp, which is becoming routine by now, I began prepping dinner. (After meeting Melissa in the visitor center and discussing Philadelphia, of course.) I cooked the sweet onions down in oil and butter for 40 minutes. That got spread on toasted bread, then topped with feta and arugula. Also on the menu was cantaloupe wrapped in prosciutto. I also opened my $3.99 bottle of wine from Trader Joe’s. Not too bad for campground cooking. 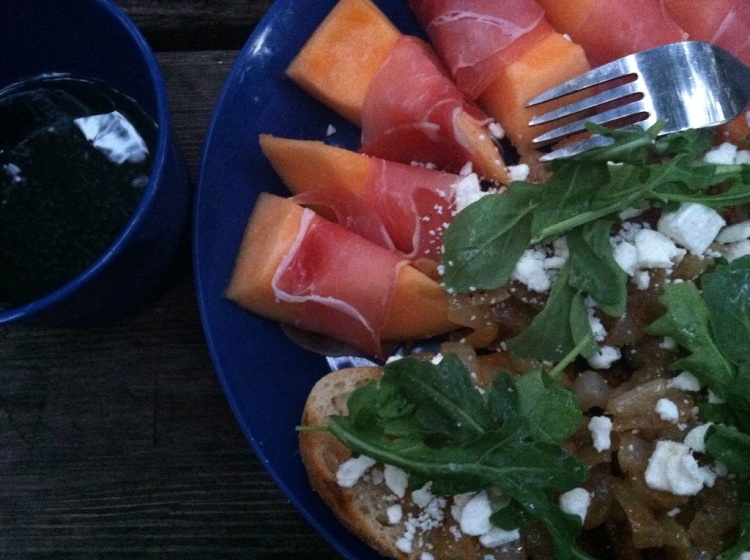 Yet again, I woke up more than an hour before my alarm that was already set with an early time. I boiled water for coffee and broke down camp. I began driving towards Crater Lake assuming that I would appreciate the extra time in the park.

Everything I’ve ever read about Crater Lake is true. It is simply more beautiful and blue than any photo could capture. I spent a good amount of time taking pictures from almost every angle I could find. 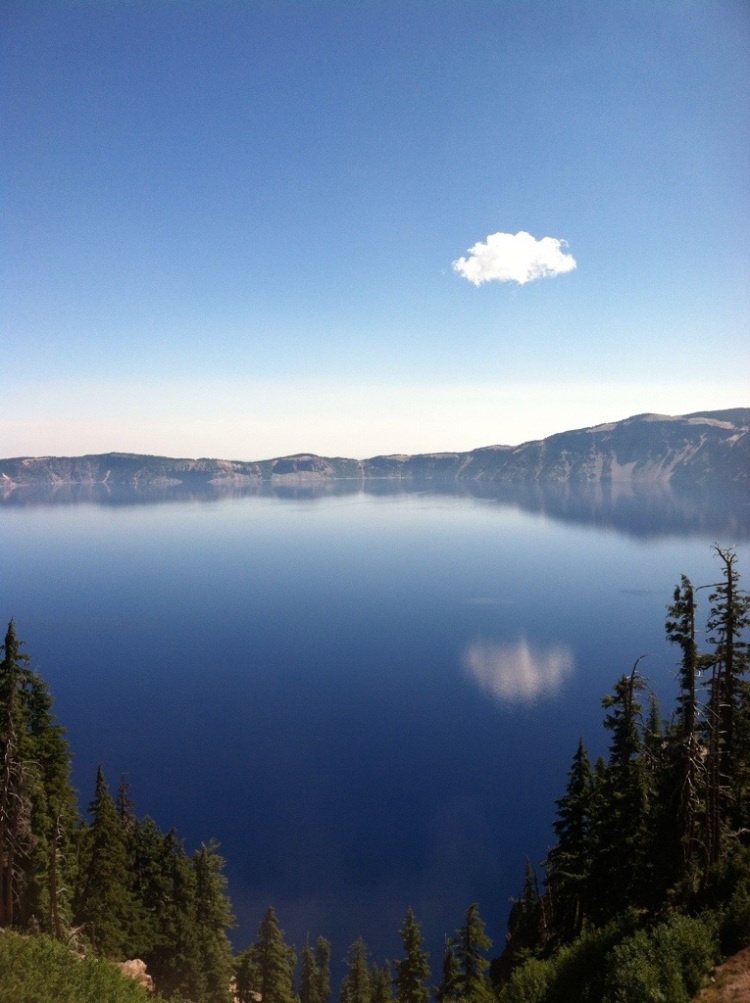 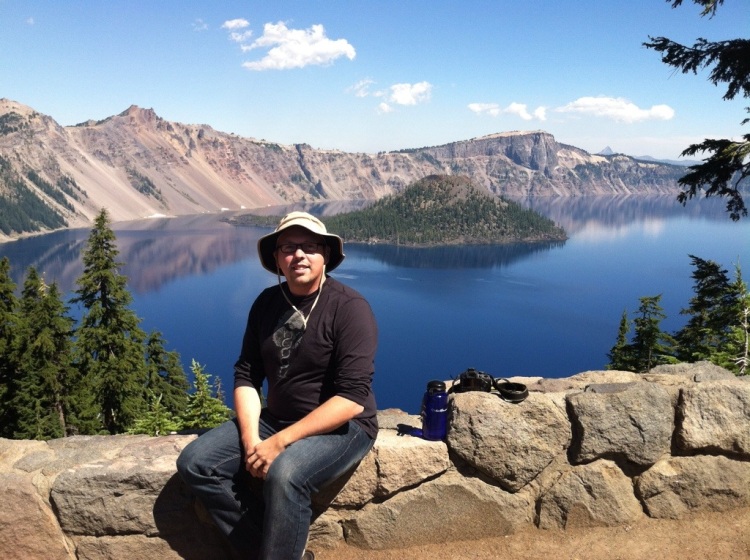 I grabbed a mediocre cup of coffee at the lodge, then began driving along the rim towards the trailhead to the boat tour. Each turnout provided a different vantage point. (Wizard Island protruding from the lake was always my reference point.) 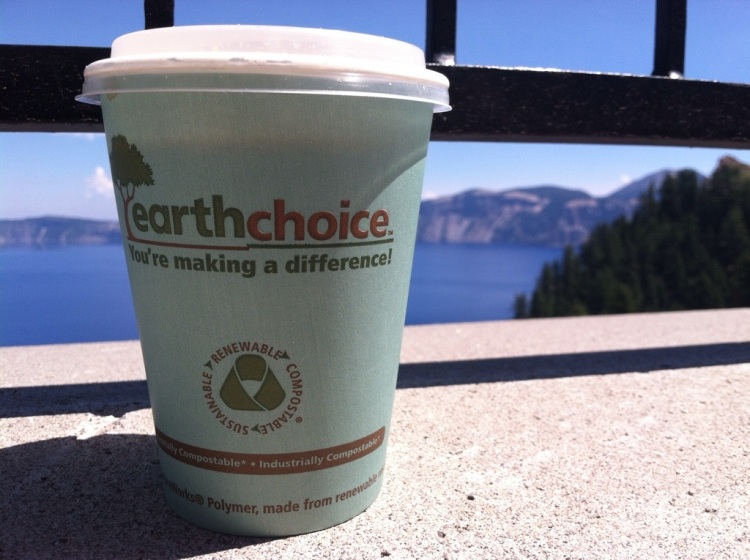 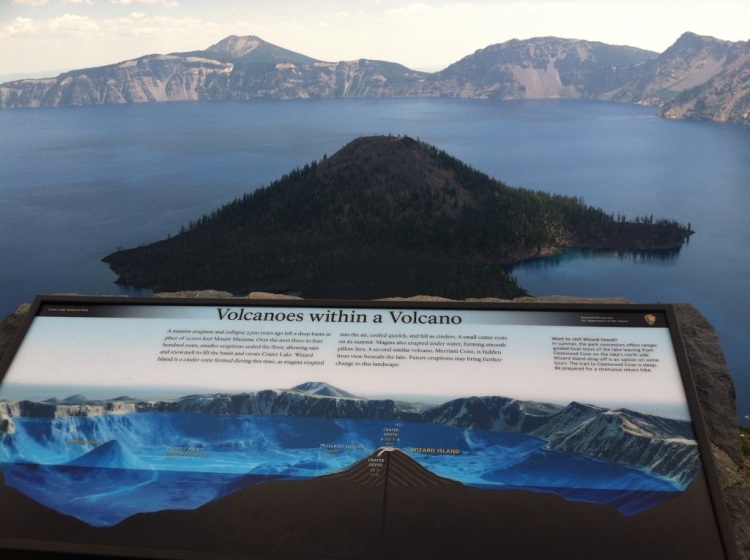 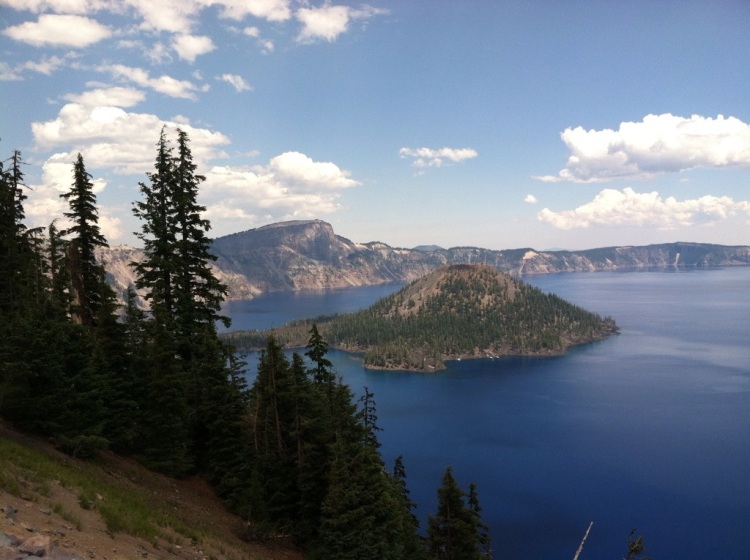 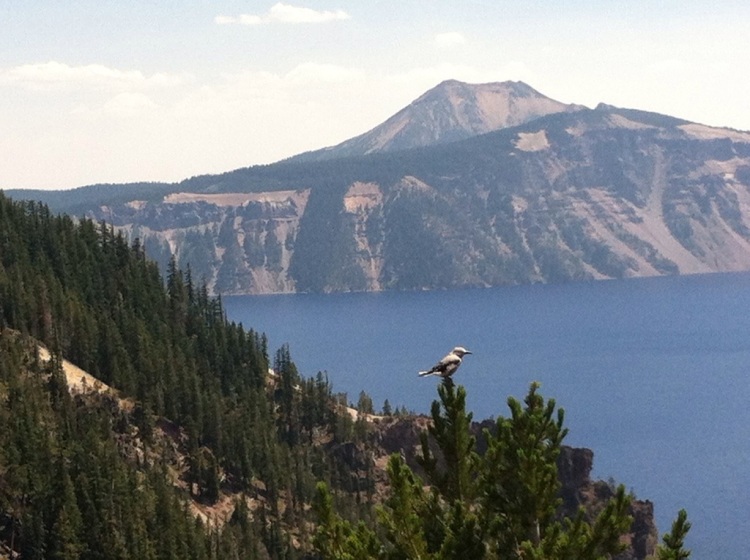 Getting up early afforded me extra time to get to my 3:30 boat tour. It’s a good thing I’ve learned not to take chances with tour reservations. Apparently, lightning was in the area a few days earlier. One of the later tours was trying to avoid certain regions of the lake as a result. Sadly, the boat ran aground and got damaged. Essentially there were no first-come, first-serve tours for several days. Only those who pre-planned could be accommodated.

On the way down to the boat dock, I randomly bumped into a family that Debra and I hiked with on our Fiery Furnace tour in Arches several weeks ago. They were just about to finish their six week road trip. What a small world!

By the time I hiked down the 700 feet of vertical descent, I was warm. I decided to take a dip in the lake. Initially, it wasn’t bad. The surface temperature is usually around 60 degrees this time of year. As I swam about twenty feet from shore, the depth of the lake increased dramatically. (Crater Lake is the deepest lake in the U.S.) The temperature changed quickly. It felt like I was swimming through ice cubes. After five minutes, I was now cooled off.

The boat ride was such a different experience from viewing the lake along the rim. A geologist volunteer provided interesting facts about the lake and the creation of the caldera. 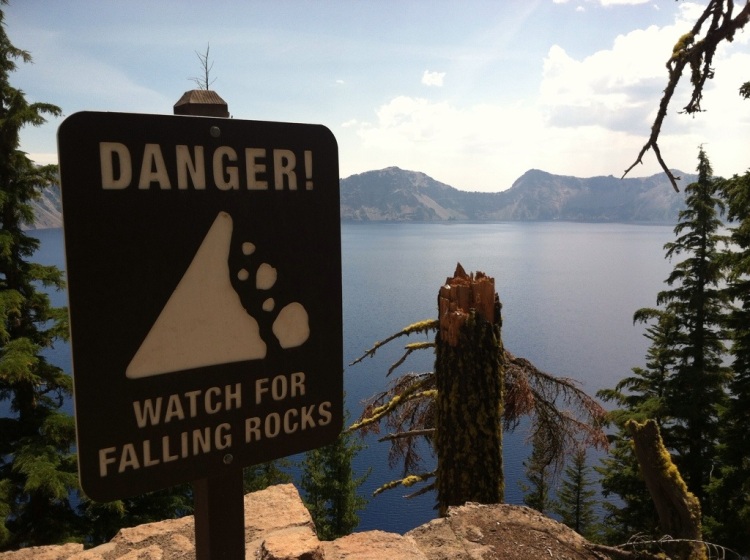 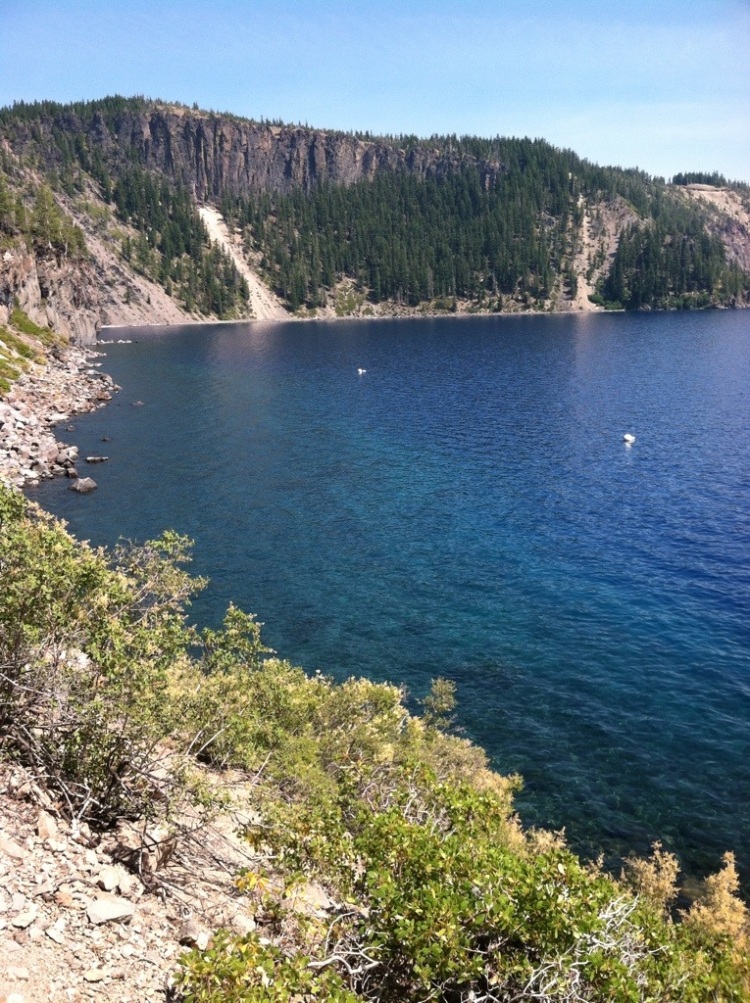 When we pulled up to the dock after almost two hours, a ranger was there waiting for the boat. As I was sitting near the front, I heard her telling the captain that someone fell off the rim, and the boat would be heading right out for search and rescue. Very scary. Only a few of us overheard her informing the captain. I’ve tried to find out more, but nothing is posted anywhere yet. You can see her binoculars below.

After a strenuous climb back up the trail, I continued driving along the rim towards the campground. The sun was beginning to lower, and the reflection made the water sparkle.

Dinner included grilled Haloumi cheese. For those who have been to Zahav in Philadelphia, great news! You can make your own grilled Haloumi at home. (If I could only perfect the green sauce that comes with the fried cauliflower.)

As I was driving out of the park, I drove along the rim for a few miles. Lucky for me, my early wake up afforded me with catching the sun creeping up the sky. As no boats were moving about that early, the lake was like glass. The reflection of the early sun created a stretched out light on the surface. 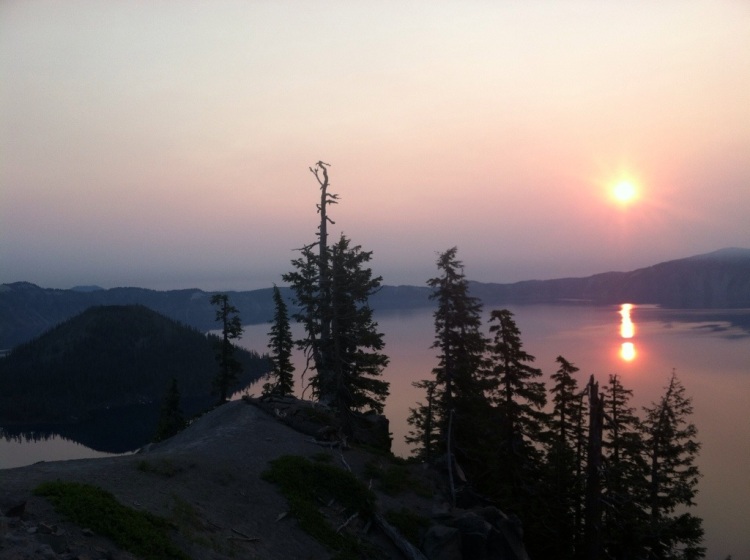 After a few hours, I made it to the coast. I stopped at Sea Lion Caves, the largest sea cave in the United States. A 200+ foot elevator takes visitors to the cave, where sea lions hang out. 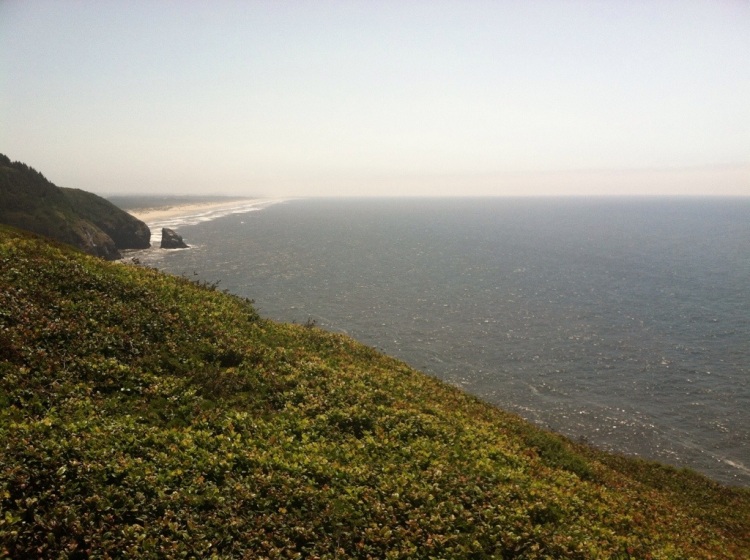 The sections of the road that hugged the coastline were amazing. Too much of the road was a few hundred feet from the coast and built up with houses and stores. Although there were plenty of parks and viewpoints, I had envisioned something more like what I encountered in California.

On the way to Portland, I passed the museum that houses the Spruce Goose, the wooden airplane made famous by Howard Hughes. The museum was closed by the time I passed, but I could see the plane through the massive glass window.

By the time I arrived in the Portland area, it was late. I decided to import food, do laundry, and relax.

My wandering days in a city are some of my favorite days. Usually, I’m wandering around NYC. To be able to wander around a new city with no plans or activities is such a treat. I started my day by grabbing a coffee in Nob Hill. As it was a Sunday, not much was open at 9:15am. I walked around the area until Salt & Straw opened at ten. It is the number one “restaurant” on tripadvisor for Portland. I was able to try four samples, before settling on two for a “split” scoop. I tried the carrot watermelon sorbet and the bone marrow and cherry ice cream. I chose the strawberry honey balsamic with black pepper and pear with blue cheese. The creativity and risk that some people exhibit when it comes to food is inspiring. I’m no “foodie”, but I do appreciate eating something that can’t be found everywhere. 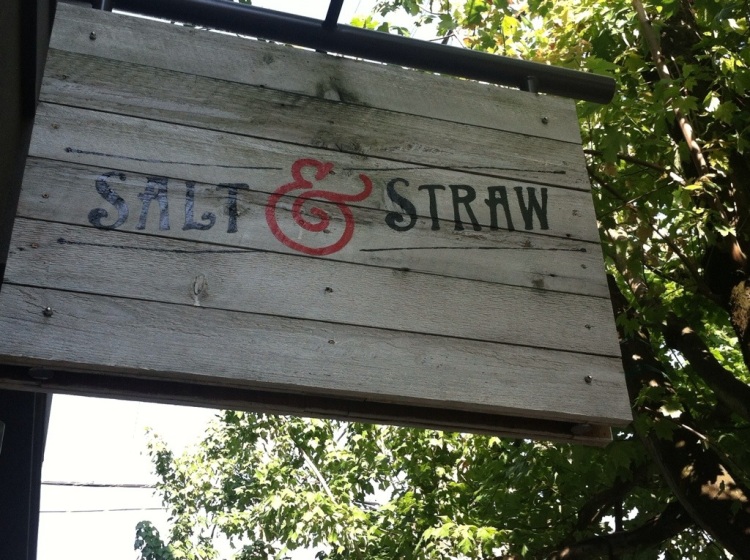 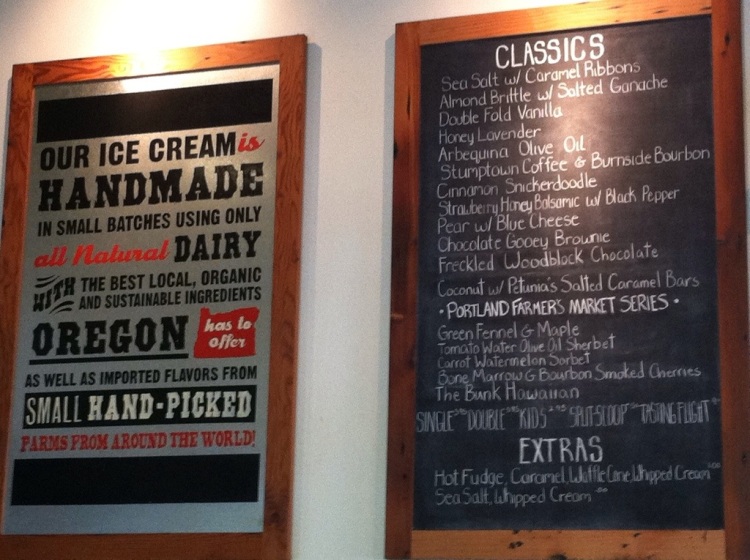 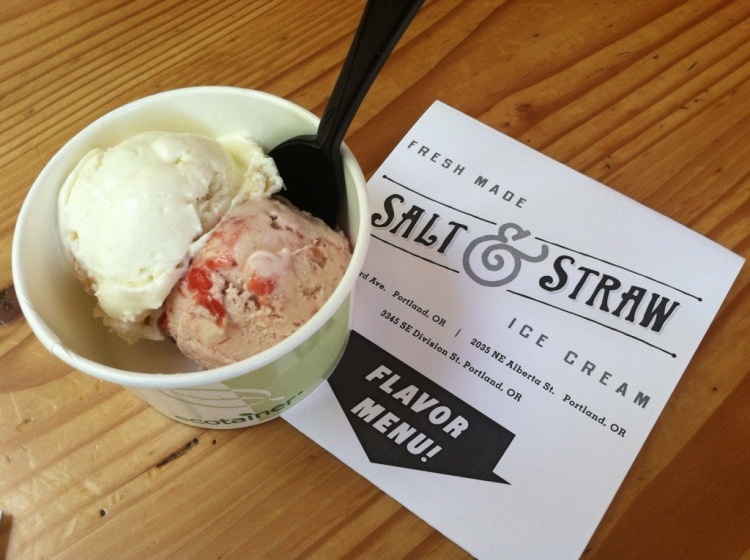 Over the course of seven or eight hours and numerous miles of wandering, I found:
-The largest independent bookstore in the country 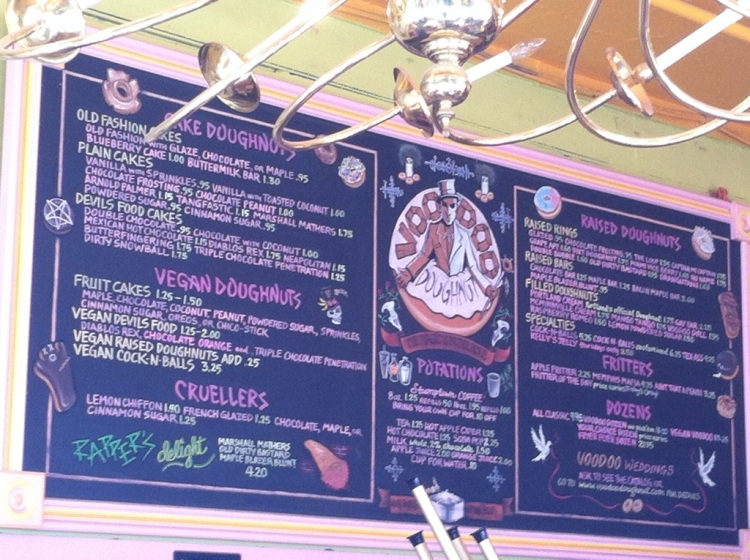 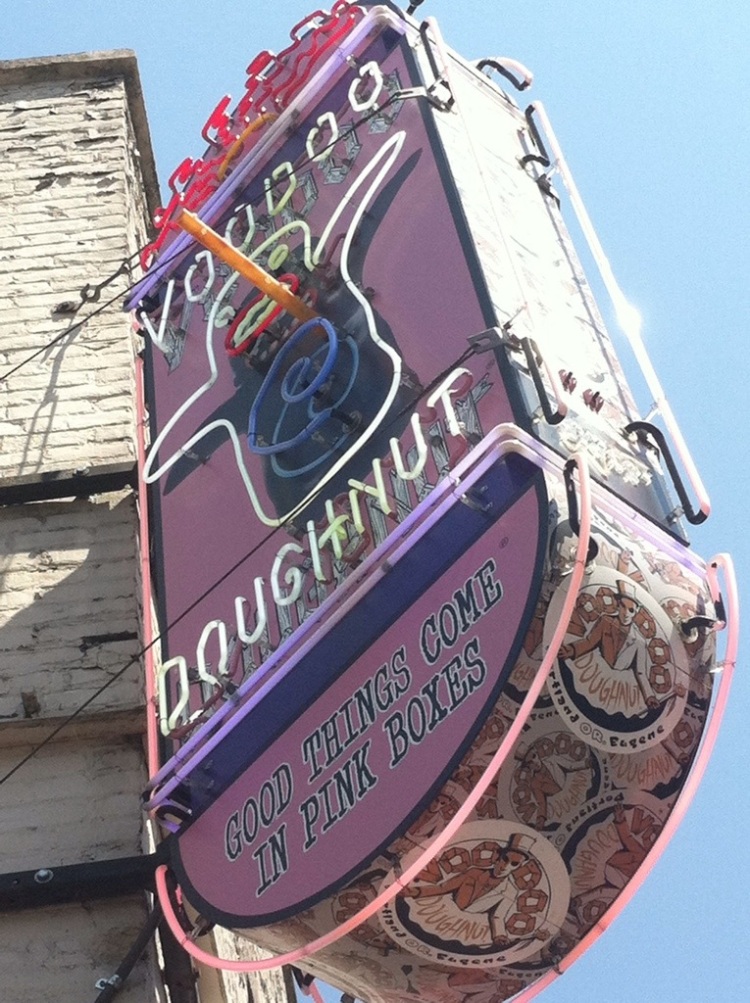 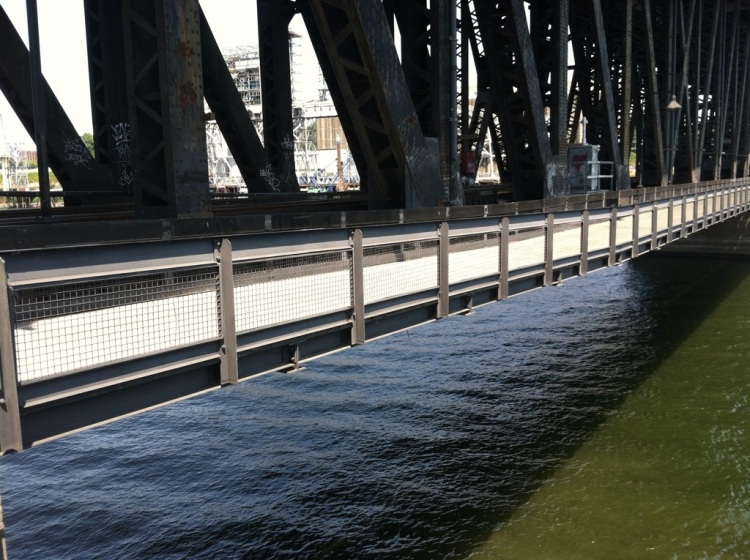 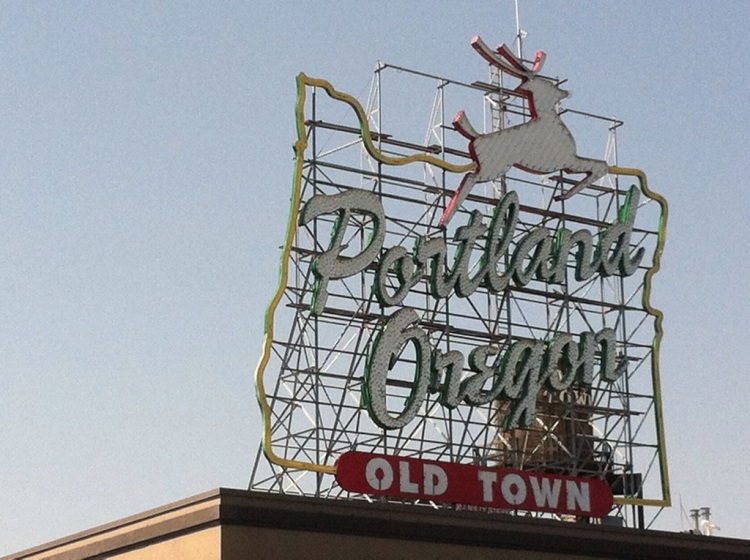 -A Bones and Brew festival 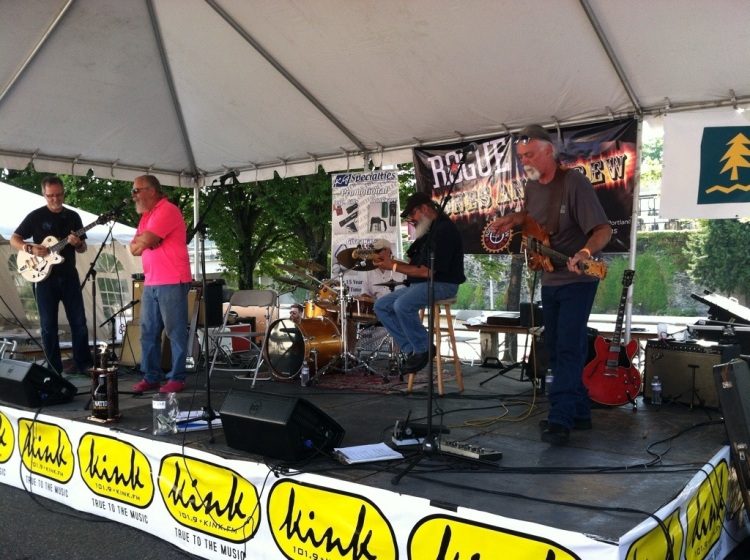 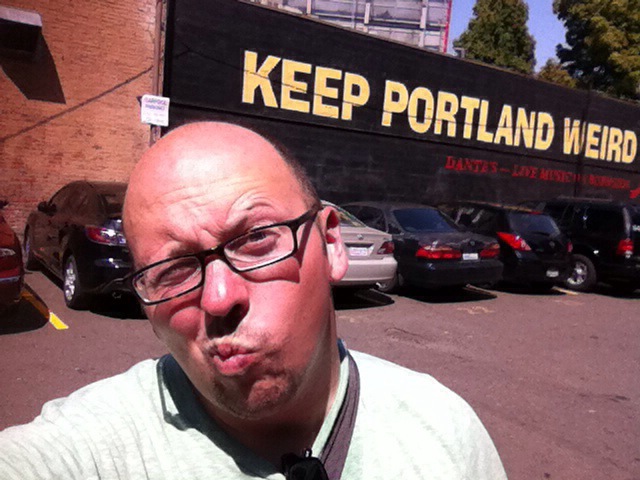 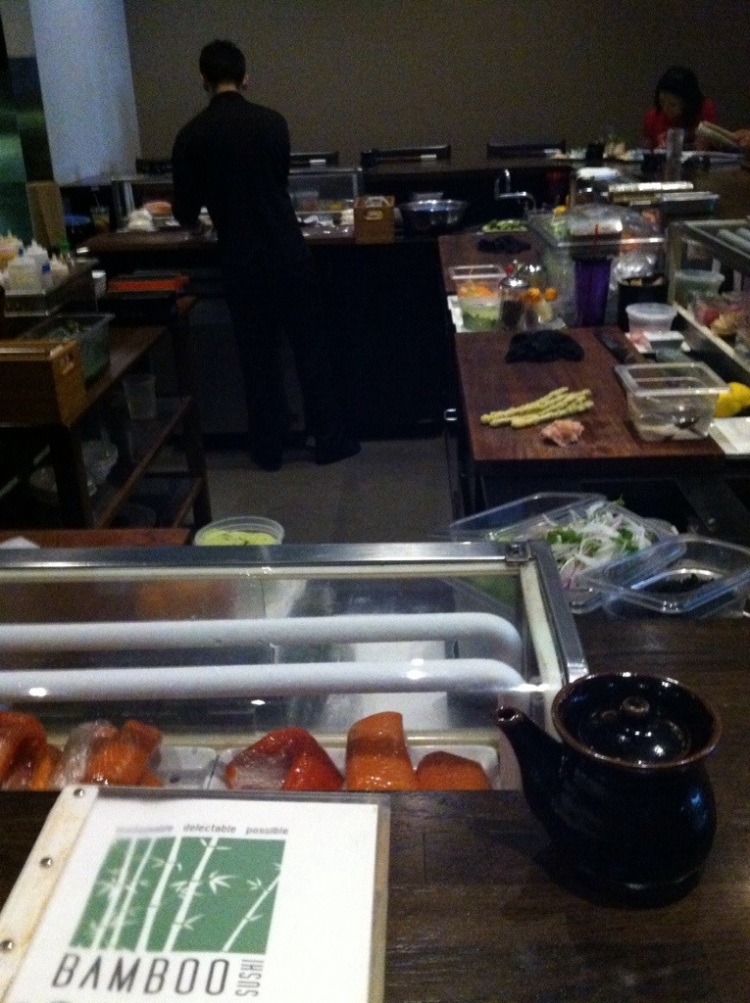 Portland is an amazing city. I could easily see myself living here.

I hope nobody was injured or worse at Crater Lake. The Park Service has plenty of signs posted to stay clear of dangerous places, but it never fails that some choose to avoid those warnings.