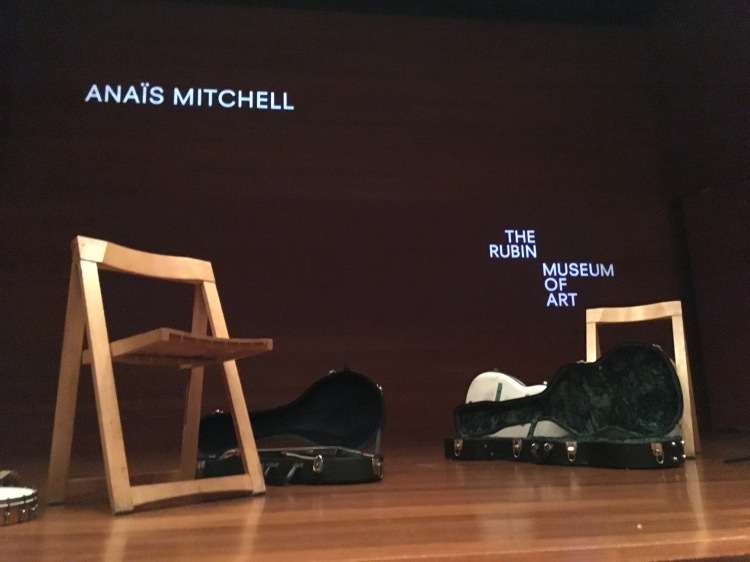 Nearly a decade ago, I was working on the campus of Georgetown University for a few weeks.  Summers there are brutally hot.  Walking between buildings to check on the students in their programs became an unnecessarily arduous task, so I would often stop in the student center to grab a cup of iced coffee and to take advantage of the air conditioning.  During one of these respites, I stumbled upon a flash sale of the remaining CDs in the bookstore, which evidently no longer wanted to sell music.  The lure of ten discs for ten dollars was right up my alley.  There were a few artists in the bin who I had heard of before, but most were completely unknown to me.  Of those ten albums purchased, one has had a lasting impact.  Initially, I was drawn to the beautiful artwork on its cover.

Upon first listen, Anaïs Mitchell’s The Brightness felt special.  Besides her undeniably distinctive voice, the emotion channeled through her lyrics was genuinely evident.  Changer stood out upon first listen.  Over the years, the album has remained one of my favorites.  Its stripped down feel appeals to what has come to be the musical aesthetic that I prefer:  Less is more.  The simplicity of the production allows the lyrics and the vocals to be out front.  (The two performances I have attended at the Rubin Art Museum are some of my favorite of Anaïs’ for this very reason.)

Whenever I hear an artist’s song or album that connects with me, I usually make a mental note to keep an eye out for any live shows.  One of the first opportunities that I had to see Anaïs perform after hearing The Brightness was a show at City Winery celebrating what would have been John Lennon’s 70th birthday.  As a John Lennon fan, I figured that the combination of seeing Anaïs perform and a unique one-off show justified the ticket price. (Wine was paired with each performer, too.  Alcohol and music are usually a great pair.)  Before the show, Anaïs happened to walk past my sister and me sitting at our table.  We made eye contact and I was tempted to thank her for music, but hesitated.  When Anaïs took the stage, her two-song setlist was undoubtably bold and daring.  The first song was John Lennon’s “Woman is the N- of the World.”  In the moment, I was surprised by the selection.  Over the years, I have become more and more impressed by that decision.  To hear an artist cover a song and make it their own unique interpretation is a very special experience to witness.  To my knowledge, no recording exists of this performance in the public sphere.  My memory must serve as its own playback device.  Anaïs then followed up with “Watching the Wheels.”  The evening at City Winery was advertised to pair music with wine, but Anaïs’ song selection was the best pairing of the night.  From that point on, I knew that Anaïs would join a short, but always growing, list of artists who I make a point to see live when possible whenever they pass through the area.

As I am getting older, I find that my own internal timeline is getting fuzzier and fuzzier.  The memories I am able to remember often stand out as little bursts of clear recollection.  Perhaps that is true for most people.  I remember being on the fence about going to see Anaïs perform a Hadestown concert in NYC, but deciding not to go at the last minute because I was not feeling one hundred percent.  I regret that decision, as the Hadestown album and subsequent musical productions have become a guiding force and muse in my life.

When Young Man in America was announced, I decided to preorder it through Anaïs’ website.  Whenever possible, I do my best to buy physical albums directly through the artists’ websites or at concerts in hopes that they will receive the highest percentage of the sale.  Artists deserve more than what I’m sure they actually receive.  When it eventually arrived, I could not stop listening.  The first two songs are perhaps my favorite “opening” to any album.  Shepherd is simply genius.  Every time I hear Anaïs perform it live, I get chills.  The song reminds me that work, and ultimately money, is not meant to be the guiding force in life.  The beauty of a song’s lyrics is in its power to make meaning to one’s own life.  Sometimes the meaning is direct, and sometimes it is one’s perspective that shapes its own unique meaning.

When Anaïs released Child Ballads with Jefferson Hamer, I was impressed by the collaboration between these two artists.  This time period in my life was a time I was the most stressed and anxious that I had ever been.  The album and the harmonies between Anaïs and Jefferson became a calming force for me.  Seeing Anaïs live at Joe’s Pub provided me with the time beforehand to open up to my friend about how stressed I was feeling.  I am forever grateful that the concert came at a time that I needed it most.  After the show, I got to meet Anaïs for the first time and express my gratitude for her music.

By the time xoa was released, my stress level had subsided tremendously.  As with The Brightness, I enjoyed the simplicity of the production of this album.  Two Kids was the highlight of highlights for me.  As a teacher, the idea that bias and hatred can be engrained in young people from such a young age is disheartening.  Very young children do not know such hatred.  When I hear this song, it reminds me of the importance of my role as a teacher to model and reinforce empathy and kindness all day, every day.

The announcement of Hadestown opening for a run at the New York Theatre Workshop was beyond thrilling.  By this point, the Hadestown album was a standard “go to” in my listening rotation.  The ability to see its next stage of development was something I was not going to miss out on, especially after missing its concert run.  The production was everything and more.  The anticipation of attending was only further heightened after the show I had tickets to was cancelled due to illnesses in the cast.  I decided to reschedule for the day after school ended.  As my first immersive theater experience, Hadestown offered a different perspective for me on what theater can be.  The addition of new songs and the visuals brought my love of the concept to a whole new level.  I left feeling so many emotions.  I credit Hadestown for launching what I have now referred to as my “Summer of Broadway” in 2016.  As I did not have any major trips planned, I was able to see nearly twenty shows that summer. (Most as lottery wins!) 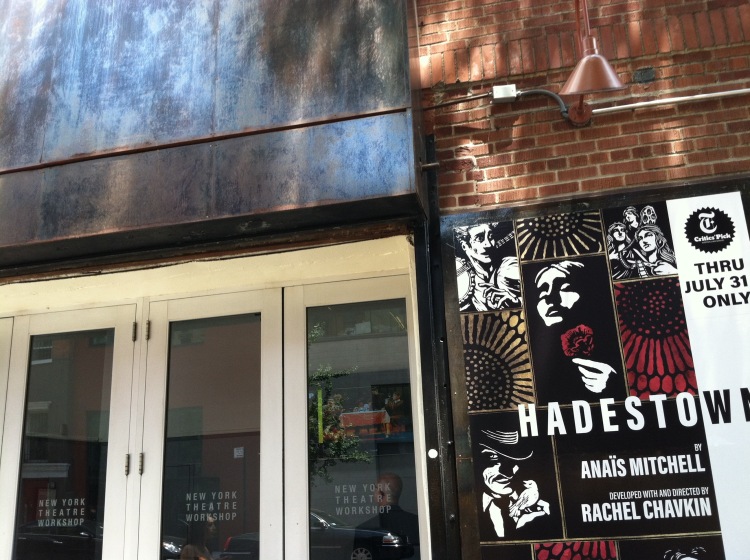 The following year, it was announced that Hadestown would open in Edmonton, Alberta.  Initially, I decided that it would be unrealistic to travel that far to see a show, especially to the Canadian tundra on the verge of winter.  Who would do such a thing?  It was out of the question.  That was until one morning before I left for work that I had a gut feeling that I was meant to go.  I decided to indulge the feeling and check online to confirm that it was not plausible or doable.  As fate would have it, there was a Saturday performance that had a random front row seat for twenty-five Canadian dollars.  There was a flight that worked with a short layover in Toronto, and a very nice hotel that was beyond inexpensive. (Again, who travels to the tundra on the other side of the continent in December, especially for just two nights?)

Not too long after booking the long weekend to Edmonton, I drove to Westchester to see Anaïs perform at a coffeehouse/church.  Before the show, I decided to start my official record collection by purchasing LPs of each album that was for sale.  (Note: I did not have a record player at the time. That would be purchased later. Talk about the cart coming before the horse.)  After the show, I was able to get the albums signed and share a note that I had written to Anaïs thanking her and hinting that I planned on sharing my appreciation of her music on this blog.  (To be completely honest, my intention was to write this blog entry back in December.  Unfortunately, several life events happened very suddenly, and my writing was shelved for many months.  It has only been the past few weeks that I have been able to return to putting my thoughts in writing.)

My trip to Edmonton is perhaps one of the best decisions I have ever made.  Being able to witness the transformation of the show from the NYTW production to something new is a very special feeling.  When the London production was announced for this upcoming November, my initial thought was to book tickets immediately.  However, reasoning told me to hold off as Hadestown has been informally announced to transfer to Broadway in 2019.  Who would fly to London during the school year for just a long weekend, especially after having been there two time in the past year?  I have not booked the trip, and don’t plan on doing so.  (Something feels very familiar about this situation.)

Over the years, many of my friends and family members have commented on how many concerts and plays I seem to attend.  Many of the shows I go to are solo adventures.  Music is not entertainment for me.  Music, especially live music, is an important facet of my life.  It grounds me.  It provides me with a time to reflect.  It helps me see ideas and thoughts from a different perspective, often providing clarity to an undeveloped idea that was already brewing in my mind.  In a time when the world feels very uncertain, live performances are comforting reminders that there are so many positive forces in this world.  True artists are generous with the sharing of their creations.  The reciprocal nature of the energy between the artist and the fan is something that is nearly tangible.  It is why I am returning to see Regina Spektor perform again tonight in Brooklyn, after already seeing her perform there last night.  It is one of the reasons I am excited to travel to Vermont this weekend.  Anaïs will be performing at the Spruce Peak Folk Festival on Saturday, and I am excited to share the experience with a dear friend.  I am thrilled about the prospect of seeing how Hadestown has evolved once again, and look forward to seeing the new production when it opens in New York.

The idea of seemingly insignificant singular moments in life turning out to be catalysts for significant moments in one’s life is an idea that fascinates me to my very core.  My body’s insane ability to sweat like no other guided me into that Georgetown bookstore nearly a decade ago.  Had I not stopped and purchased the albums on a whim, it is very unlikely that I would have known of Anaïs Mitchell and her music.  I am extremely grateful for her artistry and kindness on stage.  The power of music to be influential is undeniable.  As I am beginning to share what I write and create on a more regular basis, I am left pondering a question that is inherent in Hadestown: Is there a place where fate and free will intersect and coexist?