“No we don’t talk but people get to

know each other just by walking past

each other all the time.”

“parts of us erase”

“I’m walking towards what is mute. A

as an object that enables. I walked

into it years ago. Now it’s fraying,

compassion. Silence is another idea

Two weeks ago, I attended the opera. The venue was undoubtedly the largest venue that I have ever been to for any musical performance. The opera stretched for a mile and a half. The Mile-Long Opera took place over six nights on the High Line in New York City. What was witnessed was a transformative experience.

My relationship with the High Line has existed for nearly a decade now. For those who know me well, they have heard me discuss it frequently. It would be safe to estimate that I have been on the High Line well over fifty times. Had I known on my first visit not long after it originally opened that I would frequent it on a such a regular basis, I would have devised some sort of a creative chart in a random journal to tally my visitations for no practical purpose whatsoever. How I wish that I had had that foresight.

The High Line is quite special to me. I view it as an urban trail. Some of my visits there have been specifically to go visit the High Line, whereas many of the times that I wind up thirty feet above street level are partnered with other reasons for being in the city. Regardless of the reason for my visits, I seem to be drawn to the High Line. My ability to think and process ideas seems to become heightened the moment I set foot on the structure, not entirely unlike other trails that I hike on in the summer months.

For anyone reading this post that has never been to the High Line, there are a few basics you should know. I will let the informational placard provide the essential information:

What stands out to me each time I return to the High Line are the transformations that have taken place since my last visit. Some are to be expected based on the seasons; new plants emerge or die out, the amount of people visiting tends to thin out later in the year as the weather gets colder, artwork appears and then disappears. The long term changes are most surprising. On each new visit, it seems like a new building around the structure has been altered or sometimes even newly built.

The High Line has undeniably transformed Manhattan. The transformation does not seem like it will slow down, either. Something tells me that there are civil engineers and people within the city government who attempt to keep track of the data and statistics connected to these changes. Whether it be attendance, tourist revenue, or property values, the ebb and flow of numbers is undoubtedly on some spread sheet somewhere. What I find intriguing and comforting are the personal transformations that could never feasibly or realistically be tracked. Over the years, I have witnessed people on first dates on the High Line, people visiting from far away places, people writing, people reading, people fighting, people crying, people sitting quietly in contemplation, and a multitude of other quiet and not so quiet acts. There are moments of epiphany in my own life that have occurred on the High Line. I know that I can’t be the only one who has experienced this while being there. What I often think about while on the High Line is what would have happened if the structure was demolished, as was originally discussed and planned. The opportunities and creative ventures that have risen from the High Line would not exist today had that destruction materialized.

In the middle of July, I was visiting a friend in Colorado. At one point, I began thinking about the High Line, which I had visited just a few weeks earlier with my great aunt. We had walked its entire length on that day.  My Aunt Anne had never been to the High Line before that visit. She had worked in the city many decades ago, and did not even realize that this structure existed on the West Side of Manhattan. She thoroughly enjoyed her first visit and expressed interest in returning again someday. As with any visit with a friend or a loved one, we chatted and talked about whatever seemed to come up naturally in conversation. One of the beliefs that my aunt had recently shared with me is that we are all born for a specific purpose. Upon explaining the design process of the High Line and the Shed, which stood before us, my aunt mentioned how the architects who designed the structures were born for this reason. “That’s what they were born to do.” My guess is that the one purpose does not need to be specifically designated for just one moment or creation, but can be applied to a multitude of situations. The artists and architects responsible for the High Line show no signs of slowing down, after all.

While on my friend’s sofa in Colorado, I searched for a video about Elizabeth Diller, one of the main architects who designed the High Line. Over the years, I have seen many recorded speeches and presentations that she has given. One of the video clips that the search provided was a recent one that I had not seen before. The video was specifically about the Shed, which is the structure my aunt and I saw on our visit that is currently being constructed near the 30th Street entrance of the High Line. During the presentation, Elizabeth Diller made reference to The Mile-Long Opera which was in production. I was immediately fascinated. (A link to the video of this presentation is found at the end of the post.)

In August, I was back on the High Line before attending a concert with my sister and friends. As we were walking around, I could see many people wearing lanyards, which is not the normal sight. At one point, we came across a sign that informed the public that rehearsals were taking place for The Mile-Long Opera. My mind couldn’t believe that I stumbled upon the rehearsal space for a production that I had mentioned to numerous people since learning about it only a month earlier. We weren’t on the High Line for a long period of time, and had planned to head down to street level to go to the concert venue. We decided to walk a little bit farther, and in doing so, I saw where some of the performers in the opera were gathering. As I got closer, I needed to do a double take. Standing in front of me was Elizabeth Diller, an individual who I have admired and appreciated for many years. Although she was clearly at work and seemed very busy and focused, I could not pass up the opportunity to share my gratitude for what her designs had meant to me. Her warm smile made my day. I took the opportunity to share one of my blog cards with her and let her know that I had notes jotted down about the importance of the High Line on my life that would ultimately become what you are reading right now. I hesitated about even approaching her initially, but my gut told me that moments like these do not happen often.

The Mile-Long Opera sold out nearly instantly the day the tickets became available in September. I was not able to acquire tickets, as I forgot to bring my phone to lunch that day. It wasn’t until an e-mail was sent informing those who signed up for standby tickets that an additional performance was added. The day these tickets went on sale, I sat in the teacher’s lounge with my phone in my hand ready to make up for a lost opportunity from days earlier. There’s a slight chance that I even shushed someone trying to say hello to me. Sometimes determination gets in the way of normal social conventions. The anticipation only grew once the confirmation e-mail arrived.

The Mile-Long Opera was just like I had envisioned, yet nothing like I envisioned. Having been aware of its existence before it was well publicized and having seen a peek into the rehearsal process, it felt special to have been a participant. What will last in my mind the longest is the memory of the intense eye contact made with the performers along the opera’s route. Initially, it was uncomfortable. Eventually, it seemed imperative to make that connection. I found myself nodding and smiling subtly at each new connection made. With 1,000 performers taking part in the opera, there were many eyes to potentially connect with. Despite being strangers, we all share our humanity. Looking at life through the lens of “the biography of seven o’clock” was a kind reminder of this connection. (I couldn’t help but notice that I am writing this sentence at 7:27 in the evening, with hopes of editing, revising, and publishing this post by bedtime. How many other people are trying to find closure of an open task before the night is over at this very moment, too?) Something tells me that the performers will always associate the High Line with the performances that they helped orchestrate. Without knowing it for sure, I suspect that their notion of what a performance can be has been forever transformed. It would be fascinating to read reflections from those associated with the project. Rose, who took the train alone to meet me in the city for the opera, and I tried to compare mental notes and reactions on our walk back to the car and during the ride home. As we were unable to speak during the 90-minute performance, there were many parts to discuss. We both agreed that we felt like we were part of something quite special. (A link to a 360-degree interactive website of the opera is found at the end of the post for any curious minds.)

When I was drafting this post several days ago, I wasn’t entirely sure about how some of the ideas would ultimately connect. As with many other moments in the past decade, I decided that a walk was necessary, despite being under the weather. It is only fitting that the missing clarity for this post came during a visit to the High Line.

Elizabeth Diller once said of the High Line in an interview:

“It was an accidental condition that came as a result of incongruous things and events. What is really so great is that it is discordant. It’s not really understandable in a way.”

The Mile-Long Opera (A 360-degree interactive feature is found on the website.) 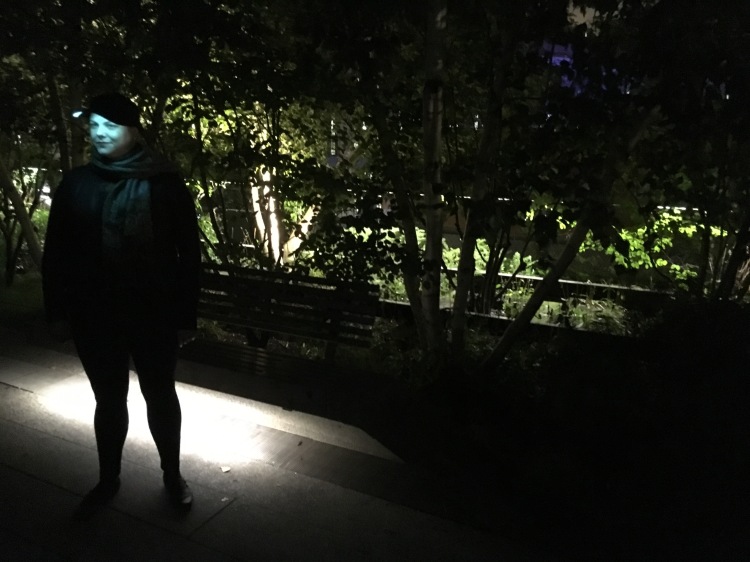 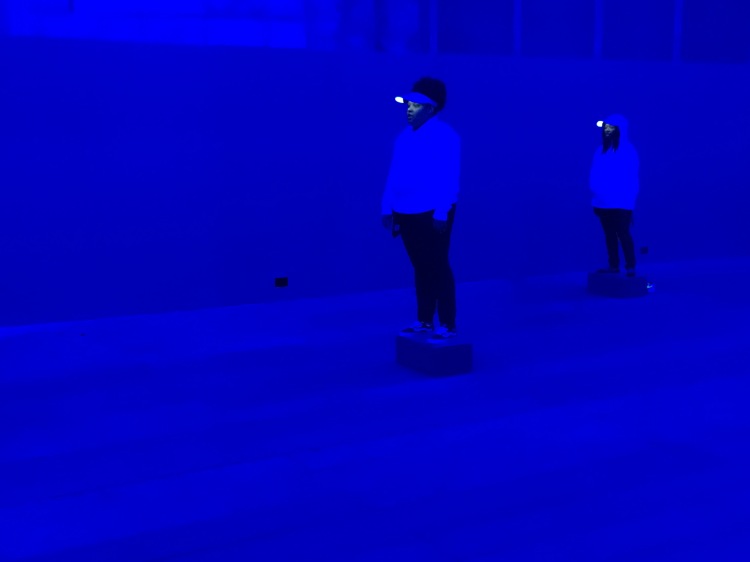